Piet and Prejudice: Why Change is Threatening

The debate about the racist nature of 'Zwarte Piet' ('Black Pete') as part of the Sinterklaas festivities reveals modern forms of prejudice. Recent research on the intersection of psychology, physiology, and neuroscience uncover this type of prejudice.

As the debates on 'Zwarte Piet' show, the face of prejudice has changed. Traditional or “old-fashioned” prejudice is characterized by strongly negative emotions (hatred or disgust) expressed to members of an out-group. Due to legislation and social norms this type of prejudice has declined over the years. However, prejudice is like a virus: Over time it mutates but always seems to find a way out.

Although in the heated debate about Zwarte Piet quite blatant forms of prejudice have been expressed, this discussion has also revealed more subtle and modern forms of prejudice. For example, the often-heard argument that “Zwarte Piet has nothing to do with racism” can itself be seen as an aspect of subtle prejudice.

One example of subtle prejudice is aversive racism. A defining feature of this form of prejudice is that although at the conscious level a person is (sincerely) unprejudiced, unconsciously the person still harbors negative stereotypic associations and negative attitudes towards the out-group. Despite the unconscious nature of these negative associations, they still seep through in subtle non-verbal behaviors, like keeping more distance from out-group members.

Aversive racism seems an important process in the discussions about Zwarte Piet, because many proponents of Zwarte Piet genuinely see themselves as unprejudiced. Why then do some of them still react so fiercely to the idea of changing Zwarte Piet?

An important factor in more modern and subtle forms of prejudice is the threat that comes from changes in the status quo. Not surprisingly, such changes are especially threatening for members of the majority group. People like to see the groups to which they belong as positive and clearly distinctive from other groups. This contributes to a positive social identity, which in turn serves key human needs for meaning, self-esteem, and certainty. However, due to the increasingly multicultural society and increasing European integration the Dutch national identity is changing, and this can be rather threatening, especially for members of the native-Dutch majority population.

How do you study prejudice that people are not aware of? And how do you measure a concept like threat when the people threatened often respond quite defensively (“Me threatened? Not at all!”). Questionnaires and other self-report measures are not ideal ways to capture these phenomena.

In our lab and other labs across the world, researchers have started to study prejudice and relationships between groups by using methodologies borrowed from neuroscience and psychophysiology (see Box). These methodologies, which include measuring brain processes or cardiovascular responses, can uncover certain unconscious processes and are less susceptible for socially desirable responses.

The threat of social change

In one of our studies male and female participants discussed gender issues. One of the pre-selected topics for debate involved traditional gender roles. During this debate it was the females who displayed the most cardiovascular signs of threat. However, when debating a different topic about how gender roles are currently changing in our society, it was the males who showed the most signs. These effects were stronger during debates between a man and a woman than in debates between either males or females among themselves.

So change can be quite threatening, especially for members of majority groups, and even for those who explicitly present themselves as unprejudiced. If we aim to improve relationships between groups at a time where the face of Zwarte Piet is changing, it is important to be aware of the threat that change may pose. And we should realize that the face of prejudice has also changed.

The Neuroscience of Prejudice and Intergroup Relations

Researchers interested in topics such as prejudice, stereotyping, and inter-group relations have increasingly started to incorporate neuroscience methodology in their research. Examples of such methodologies include measuring brain activity using EEG or fMRI, measuring levels of hormones such as cortisol or testosterone, observing eye-movements using eye-tracking, or measuring sweat using galvanic skin conductance. A variety of cardiovascular measures have also been adopted, such as ECG and blood pressure monitoring. Using these methods researchers have addressed a variety of topics, including the neural correlates of basic social categorization processes (categorizing the world as “us and them”). Other studies have investigated how people control their prejudice, and how people’s bodies respond (e.g., in terms of changes in heart rate or blood pressure) when they interact with out-group members, or when they are themselves the target of prejudice.

The Neuroscience of Prejudice and Intergroup Relations, edited by Belle Derks, Daan Scheepers, and Naomi Ellemers, brings together the most recent and groundbreaking work on this topic by scientists from all over the world. 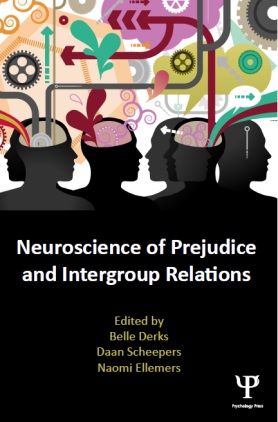 Recent events in America highlight the continued plague of racism on society. Here, I describe the nature of stereotypes in other parts of the New World with a legacy of slavery and suggest that such stereotypes have an impact on racism.

How can role models best be utilised in order to help lesbian, gay, bisexual and transgender (LGBT) people achieve equality in the workplace?

Black Pete and the Academic

Can Zwarte Piet still be black? What does the academic have to say about this? Or should we keep silent?