Professor and Principal investigator of the research group Focus on Emotions

Black Pete and the Academic

Can Zwarte Piet still be black? What does the academic have to say about this? Or should we keep silent?

So I am asked to participate in a debate on national TV at 'Arena - Dit is de dag' as an expert: “the professor on emotions.” Leiden University appears in capitals under my name when I first start talking. I am not there on my own behalf, I represent the oldest university in the country. The responsibility weighs heavily. The discussion is about the Zwarte Pieten, “Black Petes”, the army of black helpers who accompany Saint Nicholas when he distributes presents to all Dutch children on his own birthday, December 5th, to make them happy. All children? Well, yes, uhhh, or perhaps no. Maybe not black Dutch children?

Emotions and feelings of nationalism are running high between the camp of people who want to keep Zwarte Piet, because according to them he symbolizes Dutch tradition, and the camp who say the persona of Black Pete is racist and originates from or at least embodies the 300 years of Dutch institutionalized enslavement of black people.

Live on television, I am asked the first question: “Why these strong emotions?” I launch into my theoretical explanation about the function of emotions. This is obviously not what the presenter wants to hear. I am interrupted and others take over. After a long 10 minutes, I get the microphone again, my second chance.
I cautiously leave the path of the academic, the empiricist, and I strike out on my own. I wonder aloud why we have a national two-minute silence every year on May 4th to remember and honor the people who died in World War II, whereas the memorial day for the abolition of slavery on June 30th only attracts a couple of hundred people at the Surinam Square in Amsterdam.

A few minutes later, I get another turn to speak. I now recall that years ago the Amsterdam Transport Company wanted to introduce surprise checks on people’s tickets on trams. This raised strong protest from WW II survivors, for whom this evoked horrible memories. Although they were a tiny minority, their protest was immediately respected and the checks were called off. The other side of the table snaps at me “You cannot compare the Holocaust with Black Pete!” Of course not, yet I am talking here about all those people who died in slavery. It’s not up to me to tell their descendants not to feel the association with our history of slavery, is it? 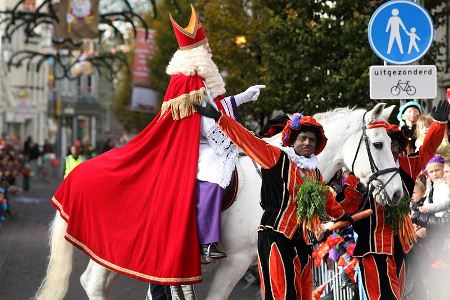 Sinterklaas and Zwarte Piet at their arrival in the Netherlands. Photo by Russavia.


But who’s talking here? I have not done any research in this area. Am I still representing Leiden University? Although the current norm may be that we, as academics, should refrain from taking sides in politics, Naomi Ellemers, professor in Social Psychology at Leiden University, clearly states that it is not norms but values that serve as our primary guiding principles. Values reflect our ideals, denote what we think is important, what we want to achieve.

In 1970, it took the philosopher and linguist Frits Staal more than 50 pages to discuss the role and responsibilities of the academic in his paper “The Academic as Nowhere Man”. He strongly advocated that science without values becomes worthless in itself. If we accept this view, this means that we should express and discuss our values; they are an integral part of our work, and thus should be open to criticism.

So that is what I did. I expressed my values. My values for a society in which people can have different concerns, different histories, different perspectives on life, but should be respected and given credit. I expressed my strong value that a minority point of view can take precedence over a majority view. And to be honest, it felt really good to express this openly what values I want to stand for, and am willing to defend.

Dear mr. Bontes,
How is this history lesson related to Prof. Rieffe’s statement that she believes the interests of a minority can take precedence over the interests of a majority? Today Zwarte Piet looks like a stereotype, a caricature, of a person with sub-Saharan African heritage. Today, people who count themselves among this group in our society, or who are labeled into this group by others, feel offended by this stereotype. It reminds them in an unpleasant way of the effects of the hidden, widespread and institutionalized racism they have to live with every day. Dutch people have made an art out of denying the existence of racism. Denial to such an extent that is has festered below the surface for decades and we now live in a country where people do not know the difference between implicit and explicit racism (or the difference between emotions and opinions apparently) and have no clue whatsoever as to what “white privilege” means. In line with Prof. Rieffe’s point I will give an example of white privilege: It is thinking you have the right to dismiss and downplay the opinion, the feelings and the daily experiences of a minority, and knowing you can get away with such an attitude because you live a life of privilege. There are little to no risks for the privileged majority.
All of us however, specially the members of a majority, have a moral duty to work towards making the lives of our less privileged fellow countrymen better. It is also our moral duty to self-reflect on the true reasons behind refusing to listen to the plea of a minority. If our response to the simple request to change the appearance of Zwarte Piet is so high in emotion that we can no longer listen, or self-reflect on our motives, or have a civil discussion, we should take this as a cue that we are being wrong. That our emotions are being tainted with personal associations and leaps in assertions that have no place in a respectful discussion about a simple request. And we know we are being wrong because we are fighting tooth and nail to prove we are not wrong.
This debate is truly the perfect place for anyone specialized in the study of human emotions and the psychological sciences.

My emotion is that people ought to be familiar with the facts of a matter before they form an opinion about the matter. Clearly I am a minority, but it is my feeling that the majority ought to conform to my emotion.
By her own admission professor Rieffe did not research the subject of Zwarte Piet. Accordingly it is my emotion that she is not qualified to speak about the subject.
On the other hand there have been lots of ethnologists and other people who did research the subject, people like Arnold-Jan Scheer, Tonny van Renterghem (deceased), Louis Janssen, Marcel Bas and others. Where were those experts in the discussion?

In the fifteenth century - long before Abraham Crijnssen defeated the slave-holding English in Surinam in 1667 - the festivities had Zwarte Klazen, also known as Sunderklazen (i.e. a Sinterklaas who had nothing to do with Sint Nikolaas; Sunde is german for sin) who clearly were an earlier expression of the archetype of the black god who rules over the Realm of the Dead (where everyone becomes pitchblack), of which Zwarte Piet is a later expression. It is ridiculous to assert that nearly two hundred years after Crijnssen got the English slave-holders to submit to his rule, Jan Schenkman - who was opposed to slavery - in The Netherlands, a few years before slavery was legally abolished, introduced someone who happened to be pitchblack as the 'knecht' (= young man, according to the etymology dictionary) of Sint Nikolaas. He did not name him, did not assert that he was or had been a slave, did not say anything about his origin.
In fact, the only things that distinguishes his 'knecht' from the earlier and later expressions of the archetype, is that he lacked the sin-chain, the cap with the plume of excellence, and the merry clothes. (It may be argued that 'merry' refers to 'death'.)

Nowhere in the above writings of professor Rieffe is it proven nor made likely that Zwarte Piet has any connection whatsoever to colonialism nor slavery by the Dutch.

Great inside piece. When we can we have to speak out to contribute to a better society. You don't stand alone in this. Same viewpoint of 5 academics in De Volkskrant on Monday 1st december - although in Dutch.
http://www.volkskrant.nl/opinie/universiteit-ontwijkt-het-zwarte-piet-debat~a3801242/

Dear Brad, the challenge is to transform Zwarte Piet into an character respected & liked & celebrated by everyone in the Netherlands. Like into a Rainbow Coloured Piet - without the big golden earrings, the curly-frizzy hair, no red lipsticks , which all are referring to a caricature of an African or of African descendants. We can keep the tradition & celebration of Sinterklaas with his 10.000's of Piet. And this is where the battle started. The "traditionalist" -read nationalist - don't want the change & deny the reasons for the caricature. But there is hope: some cities, lots of schools started with the make-over into Rainbow Pieten. A change is gonna come.

I love the idea of replacing Black Petes with Rainbow Petes. And while we are at it, lets make half of them female too.
http://www.stnicholascenter.org/pages/zwarte-piet/

When I first went to the Netherlands, I was shocked to hear about Zwarte Piet (Black Pete). It seemed very racist to me, especially since their role was to serve a powerful whit man (St. Nicholas). I heard some attempts to explain away the racism (e.g., they were black because of the chimney smoke, but apparently St. Nicholas was immune to the chimney smoke). In my opinion, it is time to abandon this racist tradition.

How to set prejudice aside when watching a debate

The last few weeks have seen the long-anticipated debates between the Democrats’ presidential candidate Hillary Clinton and the Republican Donald Trump. The debates were very fierce and both candidates availed of every opportunity to make personal attacks.

Piet and Prejudice: Why Change is Threatening

The debate about the racist nature of 'Zwarte Piet' ('Black Pete') as part of the Sinterklaas festivities reveals modern forms of prejudice. Recent research on the intersection of psychology, physiology, and neuroscience uncover this type of prejudice.

Having more women in top positions does not as a matter of fact improve career opportunities for other women. On the contrary, successful women who display 'modern sexism' to cope with a masculine work environment can undermine the ambitions of other women