Art Authentication by the Crowd

What underlies the capability to recognize the style of a particular artist from look-alike styles? And who can do it?

In 2015, a seemingly unremarkable painting was brought to sale, estimated at 700 dollars by the experts of a New Jersey auction house. Immediately after it was posted on internet, a Paris art dealer and a number of other parties saw a potential treasure in it, gradually pushing up the price to the one million dollars for which the Parisian dealer eventually bought it. The price for which, the following day, New York financier Thomas Kaplan purchased this long-lost work by Rembrandt from the Parisian, is kept secret. Kaplan owning the Leiden Collection of art of the Dutch Golden Age, himself had no doubt that it was a Rembrandt: “It was pure serendipity”, he said.

Decisions about authenticity of art are not just significant for art history; the attribution of a work of art to a prominent artist has a profound impact on its monetary value and its reception by the public. In art authentication, the stakes are high and judgments difficult, even for those who can be expected to know most of art, as the dramatically erroneous judgment by the experts of the auction house show. So, what does it take to recognize artistic styles, what underlies the capability to recognize the style of a particular artist from look-alike styles? And who can do it?

Together with the Booijmans van Beuningen Museum, the International Network of Curators of Dutch and Flemish Art CODART, and a group of Bachelor Students at the Institute of Psychology, we set off to find out. We looked at artistic style expertise in a novel way: not as a scholarly education in history of art, but as a form of unfocused and unintentional learning from just exposure to many, many exemplars of a style, without any instruction, background knowledge or explanation. Very much like children learn the rules of their language just by hearing many, many words and sentences, without taking any lesson about the rules.

We found striking similarities between implicit –language- learning and art connoisseurship. First, acquiring expertise is not necessarily helped by meta-knowledge or by a focused effort to learn what we want to learn. Children try to understand what they hear, not to discover any grammatical rules; they do, though. Simple exposure does the job; not talking about it. As Johan Cruyff said: ambitious players should maximize their contact with the ball, not with the coach. Second, even those who have become experts may well be poor at explaining exactly what constitutes their expertise. This is true for telling why we know that the sentence the horse raced along the barn fell is weird, even if we definitely and immediately know that it is weird. And this is true for telling why the upper pictures are made in the same style, while the bottom ones are not. 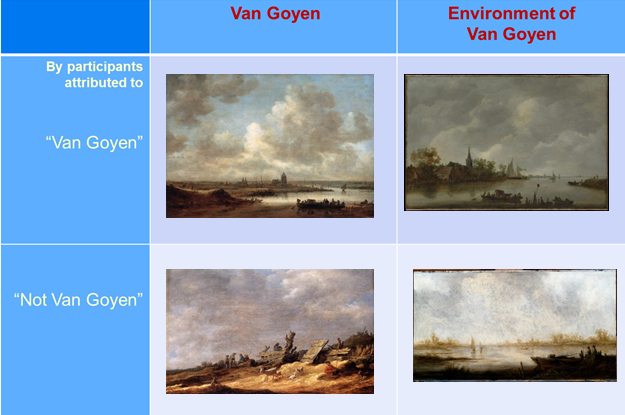 We used an experimental procedure we normally use to study grammar learning and applied it to evaluating art work. In the lab, participants looked at 50 paintings of landscapes by Van Goyen, a 17th century master. Next, we showed them 50 other landscape paintings. Half were Van Goyen’s and half were from his ‘environment’. Our participants indicated for each new painting whether they thought it was made by the same artist who made the first set of paintings or not. We tried ourselves. Overviewing all 100 paintings we presented in the lab, we could really not tell the difference between the Van Goyens and the environment (Cuyp or the Ruysdael). But we found that our participants could! Not perfectly, but definitely ‘above chance’.

Our experiment not only shows that lay persons can learn to recognize an artistic style, it also revealed interesting new information for art historians. That information is in the rating errors: The Van Goyens rated as not-Van Goyens (bottom left in the figure ) express features people find a-typical in his style, and the not-Van Goyens rated as Van Goyens (upper right in the figure) express features people find typical for Van-Goyen.

The law of large numbers

Speculating a little bit further: the crowd's eye might even smartly be resourced for new authentications, as with the recently discovered Rembrandt. To find out whether a portrait is from artist A, first post as many as possible true portraits by A on the web, together with the target painting. And just ask the crowd: do you believe or not that the target portrait is made by the same artist as the other ones? Now a handful responses will not help much, but with hundred thousands of them, the law of large numbers will nicely reduce the estimation error of the crowd, providing a pretty reliable indication of the ‘true’ authorship.

Rigorously fleshing out questions as vague as – What is artistic style recognition?- in simple experiments, by just observing and counting. Isn’t Science as beautiful as Art?

The experiment was carried out by students Psychology, as part of their Bachelor thesis: Ashley Degrise, Ellen van Heijningen, Dianne Venneker, Thomas Bortslap, Esther Visser, Pascale Zwaanswijk, Emmeke Kooistra, and Jesse Sprenkels. We thank Leiden psychologists Bruno Bocanegra, Lisa van Es and Kerwin Olfers for their help, and the Booijmans van Beuningen Museum and Codart, for providing the stimulus materials. Dr Fenna Poletiek presented the results at the international meeting of CODART, in the Prado Museum in Madrid.

How difficult is language learning? And to explain it?

Language is a vertiginously complex symbolic system, and yet humans all learn it, effortlessly, within a remarkably short period of time. How do they do this?

Bullying and autism: blaming the victim?

When it comes to bullying, we often focus on the victim, who is then often offered social skills training. Yet, when children with autism are bullied, is this really appropriate?

Campaign slogans: What’s in a name?

Much has been said about Hillary Clinton’s campaign slogans. She started out with the slogan “Love trumps hate”. This one may go down in history as one of the silliest political campaign slogans ever.