What happens if you can't communicate anymore?

I am Sun-Mi Venema, 34 years old. I noticed that I had frequent and heavy hair loss. I was also often dizzy and nauseous. Like flu symptoms, say. I decided to go to the doctor anyway and I told him about my symptoms.

The doctor suggested it was due to hyperventilation. When I noticed that wasn’t the cause, I went back. I was sent home with the same diagnosis. Until the moment my life changed dramatically ...

The moment my life changed dramatically
On 25 October 2001 I became seriously ill – with what is known as the locked-in syndrome. I had a venous thrombosis in the venous channels in my brain: a blood clot that blocked the flow of oxygenated blood to a part of my brain that governs movement. I am sadly no longer able to speak, and I communicate using a speech computer. I can no longer walk, so I get around using an electric wheelchair. The left side of my body functions reasonably, and the right side virtually not at all.

Just imagine this happening 3 days before your eighteenth birthday. You’re just about to enter adulthood. I lost everything in one blow. Your life seems to run through your fingers like sand. What’s left? All your dreams trickle away. For me, a time of mourning set in, a time of coming to terms with it all. A lot of sadness, a lot of tears, self-loathing… the question: why me? Even the delusion of putting an end to it all...

Looking at yourself in the mirror and seeing that that image doesn’t change – that was the bitter truth for me. Slowly and surely I learned to accept my new self. This was helped by sessions with a psychologist. My life was governed by a huge amount of sadness, pain, and tears. So I never found the space to really delve into what the locked-in syndrome was. Or to discuss my situation with people in a similar situation.

Neuropsychologist Femke Nijboer
In the summer of 2016 I was approached by someone who also has the locked-in syndrome and by the neuropsychologist Femke Nijboer. Femke Nijboer, winner of the L’Oréal-UNESCO Award for Women In Science, got together with people with the locked-in syndrome(LIS), muscle disease, and paraplegia to organize the festival "Locked-in? Locked-out!". During the festival people showed that despite their disabilities, they were as able as the next person to enjoy beauty, design, and art. Some of them had even actively become artists themselves since they became locked in. “Art gives me, in my speechlessness, a voice”, as Wim Tusveld, chair of the LIS working group, put it.

Locked-In/Locked-Out Festival
The festival expressed the fact that you can live a meaningful life regardless of a disability, and that you can make the same demands in terms of aids and appliances and care as anyone else. On this day everyone could enjoy testing new designs for aids and appliances, as well as enjoying theatre, debate, and a neuro-catwalk. With the help of L’Oréal Nederland, the models both with and without a disability could display their stuff on the catwalk, where they showed off new wheelchair clothing and techniques, among other things. The festival was intended for people with a disability and their family and friends, but also for anyone else who was interested. I went on the neuro-catwalk to show off the dress I wore for my first book presentation. I glided along the catwalk with my book 'Gevangen in mijn binnenwereld' (Imprisoned in my Inner World).

My first book
How this came about? Well, once I had come to terms with what had happened, in 2009 I started to write. I write with one finger of my left hand. Letter by letter I described my life story. From a young, speaking, walking girl to after my brain stem stroke. After much self-doubt, I entered a writing competition and my story was chosen as the winner. My story was published in a book. ‘Imprisoned in my Inner World’ was published in 2010.

After the publication I fell into a deep abyss. I had to deal with blow upon blow. The care I received went downhill, which led me to psychological collapse. But the sudden death of my father was also a terrible blow. I did want to write, but I was no longer entirely convinced. Until a secondary school teacher gave me the break I needed. I started writing, and gradually a second book emerged, but no publishing house was interested. In May 2016 it was announced that I would publish my second book myself. I give insights and have come to realize that you can see the positive side of every setback. In addition to being an author, I give talks about my life at schools and universities. The way they describe me is: a motivational speaker who gives talks without a voice. I do this by way of a PowerPoint presentation. This is how I tell my life story. In no time even the noisiest of halls is silent and moved.

My second book
After the Locked-In/Locked-Out! festival I got down to writing again. After 22 months I completed the writing process. On 28 March 2018, the book presentation for my second book 'Donkere wolken' (Dark Clouds) took place in the Zaantheater in Zaandam, featuring various Dutch celebrities such as Irene Moors, Ali B, and The Partysquad. 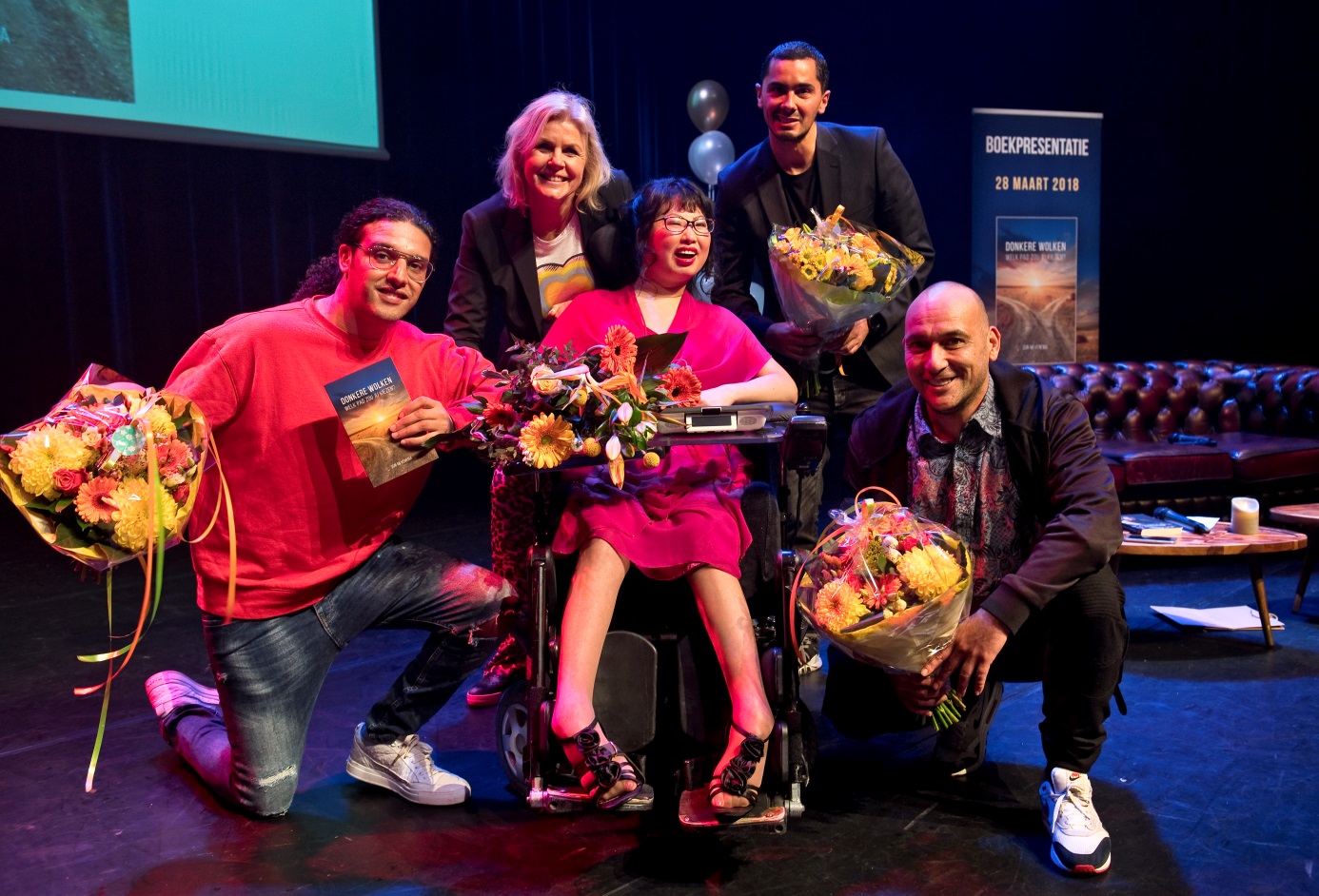 Donating to research
In the meantime I’ve thought long and hard about what I wanted to do with the proceeds of my book. I have chosen to donate it to research into the locked-in syndrome. Especially the brain computer interfaces. I heard people talking about it at the art festival, but at that point I had no idea what it was all about. I asked Femke Nijboer about it and she explained. I believe it is so important for everyone to be able to communicate. I know better than most what it’s like not to be able to communicate (or to communicate very little). Luckily I got back the function in my hand. Because could I have made it this far without hand function? Would I have been able to share my inner world? I want to be a support and a voice for those people who do not have hand function. To allow them to communicate after all. Because what happens to a person if you can’t even do that anymore?

It is a great and motivational history that shows how to overcome until the most difficult situation.
That is not only an overcoming history about the physical problem of communication, if not about strong psychology test life day a day.
A big example, how with the daily work it is possible to accept each own situation even if like seem the worst.

I am deeply moved by Sun-Mi's donation and I feel encouraged to make sure her donation is used well. I am so glad she also contributed to our Leiden Psychology Blog.

Her story is remarkable and should be heard. It is very unusual to have locked-in syndrome at such a young age. She has learned to live with it and developed herself into a guest lecturer and author. She now teaches at colleges and universities throughout the country and show that a life with LIS is possible.

She also teaches us that you shouldn't judge a book by the cover. Just because she is paralyzed does not mean she is intellectually disabled or miserable. Au contraire!

I greatly recommend reading her books "Gevangen in mijn binnenwereld" and "donkere wolken" to learn more about LIS.