Professor of Methodology and Statistics

“Dutch wounded through skiing: a remarkable increase of 14 percent” writes the The Dutch newspaper NRC. Is this really a noticeable increase or just random sampling? A quick statistical procedure provides the answer.

Last weekend NRC, a Dutch newspaper, published an article in bold face on page 3 with the heading Dutch wounded through skiing: a remarkable increase of 14 percent. Looking for explanations, the newspaper mentions that this change cannot be explained by different snow conditions or by an increase in the number of people having a ski holiday, and concludes that it must be due to personal factors such as taking higher risks and less thorough preparation.

, which represents both the mean and the variance. That is a higher mean implies a higher variance. According to the NRC article, last year there were about 700 injuries, this year about 800, so the most likely estimate of

would be 750. Is the change from 700 to 800 really a remarkable jump or just random sampling from a probability density function? With the R program it is simple to draw random numbers from a given density. Drawing five numbers at random from a Poisson distribution with

From this simple sequence of random numbers we can conclude that it is not really strange to observe 722 accidents one year, and 813 a year later; a change similar to the one presented in the newspaper. Such a change can already be expected purely based on chance. In order to obtain a better overview I sampled 10,000 observations from the Poisson distribution, which resulted in the following histogram. 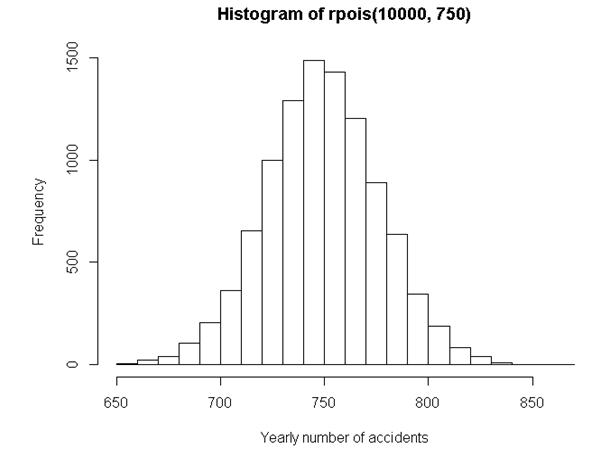 The minimum in this histogram is about 650, while the maximum is about 850. So, it all seems a big fuss instead of a real change. Moreover, the conclusion that we are taking higher risks does not seem to have any foundation at all.

Having more women in top positions does not as a matter of fact improve career opportunities for other women. On the contrary, successful women who display 'modern sexism' to cope with a masculine work environment can undermine the ambitions of other women

According to journalist Sjoerd Mossou, the “raw” nature of Feyenoord attracts troublemakers. So the “DNA” of the club needs to change. But what is actually the DNA of a group, and how do you change it?

About polite Moroccans and rude Dutch

You may think that honor and aggression are closely linked. In this contribution I will paint a more nuanced picture, and show that honor is also linked to politeness and constructive conflict management.